Anthurium is a genus of about 1000 species of flowering plants, the largest genus of the arum family, Araceae. General common names include anthurium, tailflower, flamingo flower and laceleaf. It is a monocotyledonous perennial, preferring warm, shady and humid climates, such as tropical rainforests. The genus is native to the Americas, where it is distributed from northern Mexico to northern Argentina and parts of the Caribbean. The first area where Anthurium was produced in a large scale was Hawaii, in fact the world owes a lot to people on this island breeding them. Anthurium plants Such as many other plants species are poisonous due to calcium oxalate crystals. The sap is irritating to the skin and eyes too. So remain explain people to not eat them. Anthurium has been shown to help remove formaldehyde, xylene, and ammonia from household air. It was one of the plants cited as such in the NASA Clean Air Study. 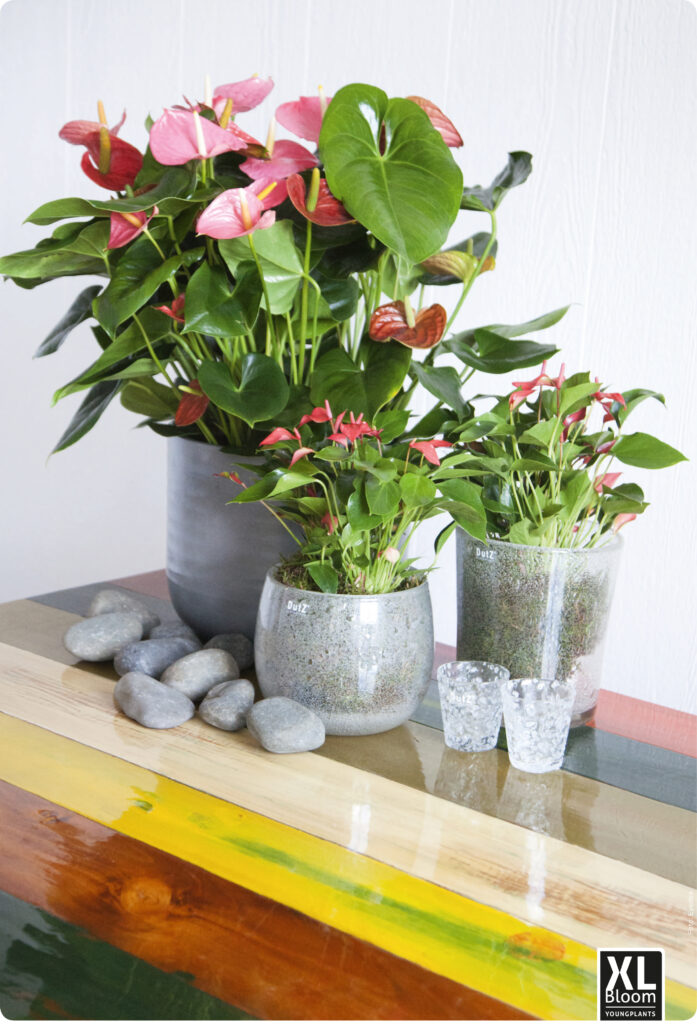 Description and biology
Anthurium is a genus of herbs often growing as epiphytes on other plants. Some are terrestrial flowers containing male and female structures.

The flowers are contained in dense spirals on the spadix. Beneath the spadix is the spathe. In fact the Spadix is the real flower, the Spathe is a coloured leaf. The fruits develop from the flowers on the
spadix. They are juicy berries varying in colour, usually containing two seeds, they mostly appear when the plant is more than ap. 18 months old and strong. Anthurium scherzerianum and Anthurium andraeanum, two of the most common taxa in cultivation, are the only species that grow bright red spathes. Red is quite unique in the plants industry which declares the fact that for decades 80% of sales in Anthurium is Red.

History of Anthurium, the Flamingo-Plant in 1876 a man who would later become the head gardener of Paris, Edouard Andre, was the first man who spotted this beautiful plant, while on a botanical-expedition
in the rain forests of Columbia.

Sir Andre brought the first Anthuriums to Europe in France. In the decades followed other European
breeders took advantage of his import. Breeders in
Hawaii and in Europe breeded many seedlings, and only around 1984 the first Anthurium became
commercially multiplied by invitro laboratories which was the biggest change so far to increase Anthurium quality and with this its popularity.

Talk to our friendly customer associates.